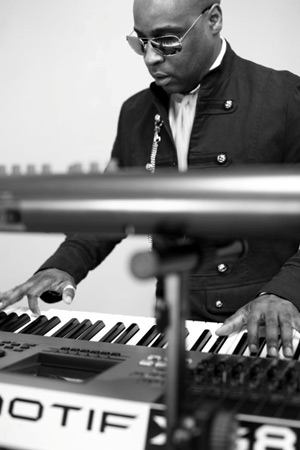 From the age of fifteen Barrie started playing the keys and at the same time discovered jazz and jazz-fusion, his heaviest influence being Jeff Lorber Fusion, who played a big part in his composing.

Playing in various bands from Jazz to rock, and 70’s music and Jazz music is where he learned his trade.

While doing a session for Black Masses in 1996 he discovered “Soulful House” music and went on to perform on a string of recordings and working on many re-mix projects.

In 2002 Barrie H Hayes released his debut single Celebrate Life with Errol Reid on lead vocals from China Black with Kenny Wellington from Light Of The World on Trumpet.

His playing straddles with ease from his vocal house productions to his straight ahead thumping rhythmic Latin house through to straight ahead jazz, to Classical.

Barrie is also the Keyboard player for “Earth Wind For Hire” 70’s Disco tribute band and “Party XS” a party band and is one of the founding members of both bands.

EWFH has appeared at Glastonbury in 2004 and have played many large events throughout the UK.

Muzology was formed in 2005 and is Barrie H Hayes & Martin Adebsi and started producing Soulful House music to much recognition.

Barrie is a composer of film & multi-media music and has composed numerous compositions from Classical to Jazz, Ambient, World music and is able compose in many different styles.

He has composed for feature length films, corporate training videos, and incidental music for pop music videos and has appeared on the keys in a few as well, Barrie is also producer of sample packs for Logic Pro

You will also find his work in production music library catalogues, Barrie is currently scoring music for a feature film as well as composing classical music for a French documentary.

Back to “THE BAND”